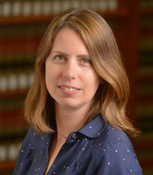 California’s ambition to retake the lead on climate change policy in the United States received a major boost Monday as the Biden administration moved toward allowing the state to once more set its own car pollution standards, a right revoked under former President Trump.

Cara Horowitz, co-director of the Emmett Institute on Climate Change and the Environment at the UCLA School of Law, said restoring California’s waiver is crucial to the state’s efforts to fight climate change.

“California has this fairly ambitious goal of reducing greenhouse gas emissions by about 40% by 2030. And an even more ambitious goal of getting to carbon neutrality by 2045,” she said. “It can’t do those things unless it’s able to tamp down significantly on pollution from vehicles.”