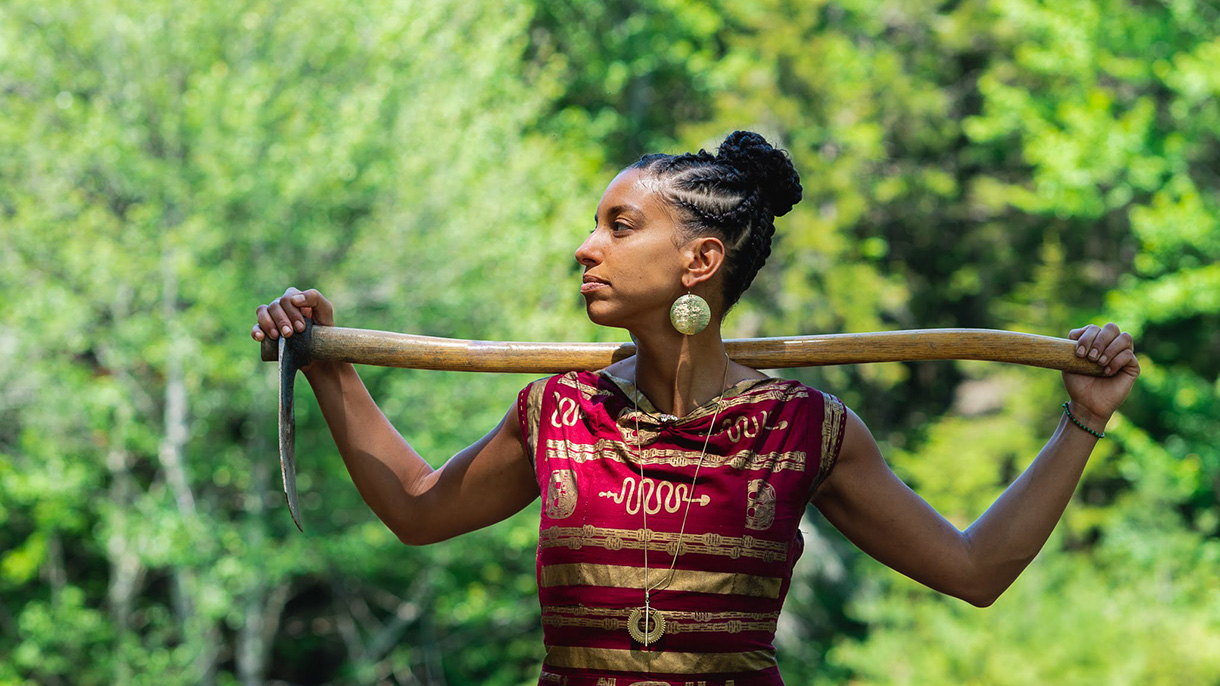 As a young Black child raised in the rural northeast, it was very difficult to understand who I was and where I belonged. Some of the children in our conservative, almost all white public school taunted, bullied, and assaulted my siblings and I, and I was confused and horrified by their malice. But while the school was often terrifying, I found solace in the forest. When human beings were too much to bear, the earth consistently held firm under my feet and the solid, sticky trunk of the majestic white pine offered me something stable to grasp. I imagined that I was alone in identifying with Earth as Sacred Mother, having no idea that my African ancestors were transmitting their cosmology to me, whispering across time, “Hold on daughter – we won’t let you fall.”

I never dreamed that I would become a farmer. As my race consciousness evolved in my teenage years, I got the message loud and clear that Black activists were concerned with gun violence, housing discrimination, and education reform, while white folks were concerned with organic farming and environmental conservation. I felt that I had to choose between “my people’’ and the Earth, that my dual loyalties were pulling me apart and negating my inherent right to belong. Fortunately, my ancestors had other plans. I passed by a flyer advertising a summer job farming in Boston, that promised applicants the opportunity to grow food and serve the urban community. I was blessed to be accepted into the program and from the first day, when the scent of freshly harvested cilantro nestled into my finger creases and dirty sweat stung my eyes, I was hooked on farming. Something profound and magical happened to me as I learned to plant, tend, and harvest, and later to prepare and serve that produce in Boston’s toughest neighborhoods. I found an anchor in the elegant simplicity of working the earth and sharing her bounty. What I was doing was good, right, and unconfused. Shoulder to shoulder with my peers of all hues, feet planted firmly in the earth, stewarding life-giving crops for community – I was home. I was a farmer.

After 10 years of working on other people’s farms, my partner Jonah and I realized it was time to pay it forward with our own project. The seminal moment came when we were living in the South End of Albany in 2005 with our two young children and could not, despite our college degrees and farmy skills, access fresh food for our family. Our apartment was in a neighborhood under food apartheid, that system of institutional racism that populates certain zip codes with fast food and liquor stores, and other zip codes with upscale farmers markers and high-end groceries. When our neighbors learned that we knew how to grow food, they demanded, “When are you going to start the farm for the people?”

We took that challenge seriously and started exploring nearby lands to see which parcel would claim us as friends and stewards. In 2006, we wed ourselves to 80 acres of eroded and degraded mountainside land which would become Soul Fire Farm. We spent years healing the soil with cover crops and mulch, regenerating the forest, and building a straw bale solar-powered home by hand, using the most sustainable technologies available. The farm grew over the years from our family’s project to a community farm with a staff of eight people and an extended family of thousands of volunteers, alumni, and members. It shifted from a parcel that was privately owned by our family to a cooperative model where all residents have a voice in decision-making and the Land herself has veto power through divination.

In the Krobo language of Ghana, there is a proverb that guides our work, “Three stones make the cooking pot stand firm.” The three “stones” of our work are the farm, the training programs, and the

root-cause organizing. Our first and most important “stone” is the farm. We intensively cultivate 7-acres of heirloom vegetables, fruits, herbs, and pastured heritage livestock using Afro-indigenous regenerative practices that leave the land with more organic carbon and biodiversity each year. The soil is now restored to pre-colonial levels of organic matter. We also care for 70+ acres of wildlands which are sustainably harvested for fuel and medicines, while maintaining habitat for our non-human relatives from black bear to green heron. All that nutrient dense food gets boxed up weekly and delivered at no-cost to the doorsteps of the hundreds of members of our “Solidarity Shares.” Many of these members have asked for our support to grow their own organic food, and we now have helped build and maintain over 50 urban gardens for families in need.

Our second “stone” is the training programs. Many folks do not have the luxury to attend rural agricultural schools or work for free at a so-called apprenticeship. So, we attempt to “skill up” our community through the BIPOC FIRE (Black-Indigenous-People of Color Farming in Relationship with Earth) 50-hour residential course that weaves together regenerative farming, natural building, organizing, and trauma healing in a culturally relevant and supportive space. In light of COVID, this training is offered online in videos, webinars, and other free dissemination of knowledge on Black agrarianism. Hundreds of new earth-savvy farmers have been birthed from this program nationwide.

Our third “stone” attempts to address the structures that prevent farmers and the sacred earth from thriving. It is no accident that 98% of the nation’s farmland is owned by white people, that Black farmers only comprise 1.5% of operators, and that our people are more likely to suffer from diet related illnesses and hunger. It is no accident that agriculture is a leading driver of climate change and habitat loss. It’s no accident that farmworkers, who are over 85% people of color still do not have equal protections under the law. Reparations are due for a history of enslavement, dispossession, and devastation. We catalyze reparations through our Uprooting Racism training program, a regional land trust for Indigenous and Black land stewards, a reparations map that matches those with inherited wealth to farmers who need resources, and tireless environmental and social policy advocacy. We are also working in solidarity with Turtle Island indigenous communities whose land was violently wrenched from them and who deserve immediate and unequivocal sovereignty in their unceded territories. Our work since 2010 has directly touched at least 40,000 people with concentric ripples of impact beyond that.

We are working toward a food system that is just and sustainable, from sunshine to plate. We belong here, bare feet planted firmly on the generous land, hands calloused with the work of sustaining and nourishing our community. The seed is passed to you.