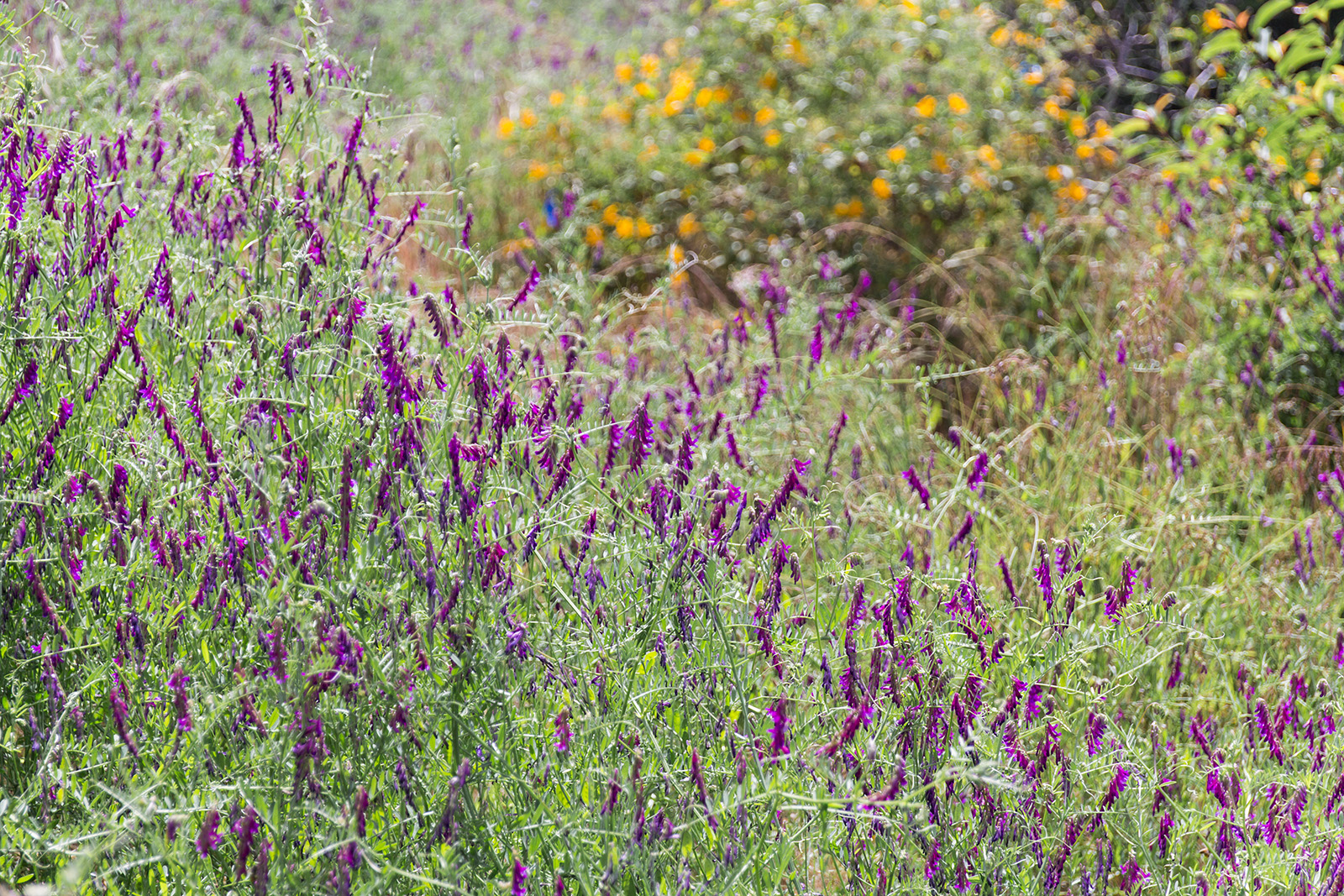 Originally published by Nate Nickolai in the Daily Bruin

Students don’t need to drive for hours to find a California superbloom – UCLA has one in its own backyard.

Located off of Bellagio Drive, just past the Krieger Center by Sage Hill, is UCLA’s last native Californian plant life habitat on campus. And with the rainy winter, the native plant life has begun to bloom.

Monday, a group of students gathered next to Sage Hill’s unassuming entrance – a couple of small poles toward the back of the day care parking lot – awaiting direction from geography professor Thomas Gillespie.

Gillespie, who began overseeing Sage Hill about seven years ago, emerged from the side of the entrance and asked the group for help retrieving shovels for the day’s planting of California sunflowers – miniature versions of traditional sunflowers.

Taking the lead, Gillespie began trudging up a small and almost invisible pathway, which was navigable only by following small depressions in the otherwise overgrown vegetation.

“See the birds,” Gillespie said, pausing to point at a flutter of movement in the trees above. “Aren’t they cool!”

Spotted towhee and California towhee are just two of the native Californian animal species that inhabit Sage Hill. Along with band-tailed pigeons and California bumblebees, the site provides a space for native species to interact with each other as they would have hundreds of years ago.

Further up the path, the vegetation grew thicker, transforming into a small oak forest. A couple of hammocks hung between tree trunks – a sign of college students dozing in their natural habitat according to Gillespie.

However, just outside of the trees, the green came to a halt and the purple, orange and yellow began.

The wildflowers began sprouting about three weeks ago, Gillespie said, and will continue to bloom for about two more weeks.

Kayla Patel, a fourth-year biology student and member of UCLA’s Sustainability Action Research program, said the flowers are similar to ones she saw this year at larger super bloom sites such as Joshua Tree National Park, although they are in smaller groups at Sage Hill.

SAR and the Environmental Student Network have volunteered with Sage Hill in order to preserve the native plant life against the encroachment of non-native species, such as the mustard plant.

“It’s the only place (on campus) that hasn’t been replaced completely by invasive (species),” Patel said. “It’s really important so that people – students, teachers and anyone from LA – can see without traveling way off to the super blooms.”

At the end of the trail, a larger group of students gathered, planning to weed the area and plant new California sunflower seedlings taken from the hill’s older, naturally growing species of the same name. Patel and Gillespie led a smaller group to the flower nursery – old bird cages – where small pots of tiny buds sat on the dirt ground.

After Patel handed out seedlings to students, Abir Hossain hauled a plastic green watering can and began sprinkling newly planted flowers further up the hill.

“Native ecosystems thrive on native plant species,” said Hossain, a second-year environmental science student and a member of SAR. “So it’s important to maintain native species because it maintains the entire ecosystem.”

Back at the bottom of the hill, students had begun planting the California sunflowers. Some students picked weeds while others dug small holes as Gillespie wandered around, marking native species with blue ribbons and sounding off their names in quick fashion.

“It’s the only place on campus where you can say, ‘Hey, this is what nature is,’” Gillespie said.