It’s hard to imagine the Arctic without sea ice.

But according to a new study by UCLA climate scientists, human-caused climate change is on track to make the Arctic Ocean functionally ice-free for part of each year starting sometime between 2044 and 2067.

As long as humans have been on Earth, the planet has had a large cap of sea ice at the Arctic Circle that expands each winter and contracts each summer. The knowledge that sea ice is on the decline is not new: Satellite observations show that since 1979, the amount of sea ice in the Arctic in September — the month when there is the least sea ice, before water starts freezing again — has declined by 13 percent per decade.

Scientists have been attempting to predict the future of Arctic sea ice for several decades, relying on an array of global climate models that simulate how the climate system will react to all of the carbon dioxide entering the atmosphere. But the models’ predictions have disagreed widely. Among the current generation of models, some show ice-free Septembers as early as 2026; others suggest the phenomenon will begin as late as 2132.

The UCLA study, which was published in Nature Climate Change, focuses the predictions to a 25-year period.

The study’s lead author is Chad Thackeray, an assistant researcher at the UCLA Institute of the Environment and Sustainability’s Center for Climate Science. He said one reason predictions about sea ice loss diverge so much is that they differ in how they consider a process called sea ice albedo feedback, which occurs when a patch of sea ice completely melts, uncovering a seawater surface that’s darker and absorbs more sunlight than ice would have. That change in the surface’s reflectivity of sunlight, or albedo, causes greater local warming, which in turn leads to further ice melt. 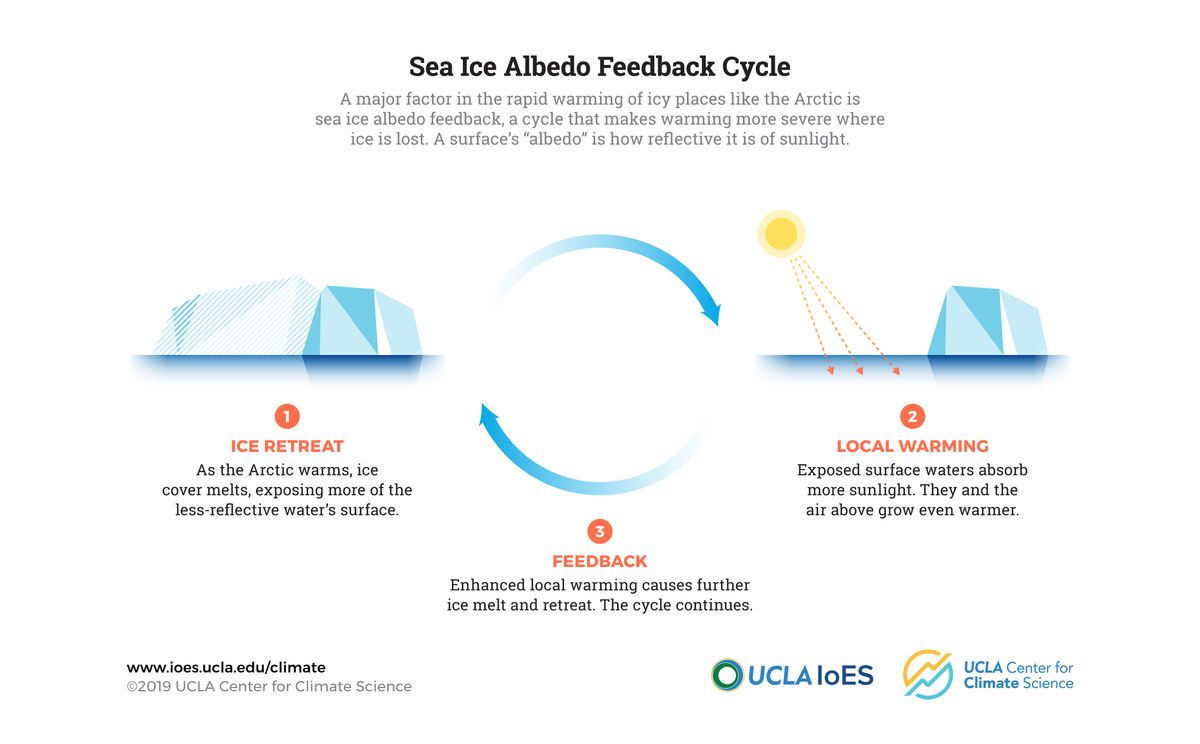 The cycle exacerbates warming — one reason the Arctic is heating up twice as fast as the rest of the globe.

For their study, Thackeray and co-author Alex Hall, a UCLA professor of atmospheric and oceanic sciences, set out to determine which models are most realistic in how they weigh the effects of sea ice albedo feedback, which they figured would lead them to the most realistic projections for sea ice loss.

Luckily — for research purposes, at least — sea ice albedo feedback not only happens over long periods of time due to climate change; it also happens every summer when sea ice melts for the season. And satellite observations over the past few decades have tracked that seasonal melt and resulting albedo feedback.

Thackeray and Hall assessed 23 models’ depiction of seasonal ice melt between 1980 and 2015 and compared them with the satellite observations. They retained the six models that best captured the actual historical results and discarded the ones that had proven to be off base, enabling them to narrow the range of predictions for ice-free Septembers in the Arctic.

The approach of using an observable process in the current climate to evaluate global climate model projections of future climate was pioneered by Hall and his group in 2006, in a study focused on snow albedo feedback. (As the name implies, snow albedo feedback is similar to sea ice albedo feedback but involves snow loss uncovering a darker land surface.) It has since become widely used in climate science as researchers try to improve the precision of their projections.

The fate of Arctic sea ice is a key topic for climate scientists because of its role in temperatures around the rest of the world.

“Arctic sea ice is a key component of the earth system because of its highly reflective nature, which keeps the global climate relatively cool,” Thackeray said.

There are other environmental and economic implications to ice loss as well. Sea ice is critical to the Arctic ecosystem, and to the fishing industry and indigenous peoples who depend on that ecosystem. And as Arctic ice is lost, more waters are used for commercial shipping and oil and gas exploration, which presents economic opportunity for some nations, but which also contributes to further greenhouse gas emissions and climate change.

“The changes to come will have broad environmental, ecological and economic implications,” Thackeray said. “By reducing the uncertainty in when we’ll see those changes, we can be better prepared.”

The research is line with the goals of UCLA’s Sustainable LA Grand Challenge, an initiative that aims to transition Los Angeles County to 100 percent renewable energy, 100 percent locally sourced water and enhanced ecosystem health by 2050.

Top image: The fate of Arctic sea ice is a key topic for climate scientists because of its role in temperatures around the rest of the world. | Photo via NASA.