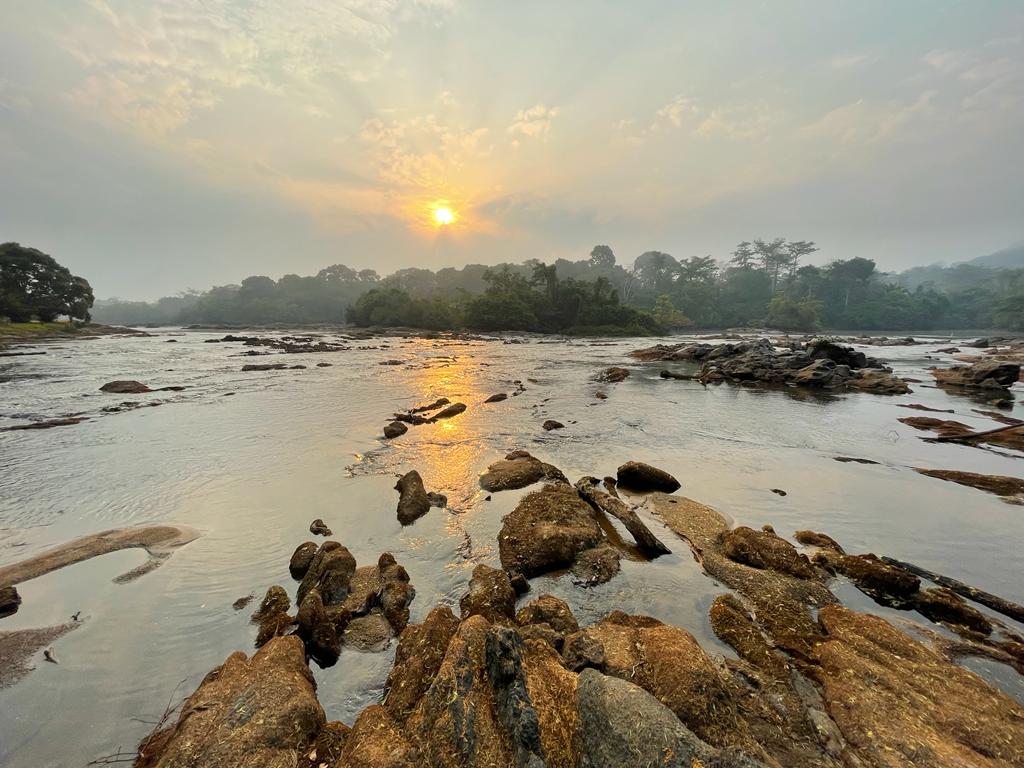 On World Chocolate Day, a new partnership protects biodiversity and supports cocoa farmers in the Democratic Republic of the Congo.

Thursday, July 7, 2022, Epulu, Democratic Republic of the Congo – Today a consortium of farmers, conservation organizations, companies, government bodies, and universities and research institutes announced an innovative landscape-focused collaboration to secure the future of the Okapi Wildlife Reserve, a UNESCO World Heritage Site in Ituri Province in the Democratic Republic of the Congo, and to stimulate the local economy by supporting the production of sustainable cocoa.

Recognizing the role they can play in addressing cocoa-driven deforestation while supporting farmer livelihoods, partners to this initiative – including the Congo Basin Institute (CBI) at the University of California, Los Angeles (UCLA), the International Institute of Tropical Agriculture, the non-profit Rikolto, and the Wildlife Conservation Society, with support from and the United States Agency for International Development (USAID) – have joined an ambitious “Statement of Intent”, that lays out a shared vision for supporting farmers to produce sustainable cocoa without causing deforestation, and signals the start of a unique, landscape-focused partnership that relies on collective action to secure the future of one of the world’s most important forest ecosystems.

Actors in the local cocoa value chain, including Okapi Cacao Cooperative and the Union of Cocoa Growers of Congo (UPCCO), will also participate, as well as global private sector actors, amongst whom ZOTO, Silva Cacao and CocoaSource are the first movers. The Ituri provincial government is committed to creating an enabling institutional environment. The partnership focuses on the landscape around the Okapi Wildlife Reserve, a protected area that supports astounding biodiversity in eastern DRC.

Cocoa trees, the plants that give us chocolate, grow in the world’s most vulnerable rainforests. However, our love of chocolate has come at a cost. West Africa, where 70% of the world’s cocoa is grown, has lost over 90% of its forests in the last 100 years, due in part to cocoa production. Consumers and companies are increasingly aware of the need to produce cocoa without causing environmental damage, but the inexorable demand for more chocolate, combined with climate change, is creating pressure to convert new areas of biodiversity-rich forests in Africa to cocoa production.

“The world desperately needs solutions that produce the food people need while protecting rainforests,” said Virginia Zaunbrecher, associate director of CBI at UCLA. “This group is developing a durable solution to that challenge that will provide people with the chocolate they love while protecting this critical forest and supporting the farmers who live there.”

The Democratic Republic of the Congo represents one of these new frontiers. Cocoa production here, particularly in the troubled north-eastern regions of Ituri, North Kivu and South Kivu, has been growing rapidly, with exports tripling between 2016 and 2020. This has provided a welcome boost to the local economy of the region but is also driving the loss of the country’s forests, globally important for their biodiversity and their role in mitigating climate change.

“We have seen elsewhere how quickly forests can be lost or degraded as a result of unsustainable cocoa production. We now have a window of opportunity around the Okapi Wildlife Reserve to flip this narrative and show how cocoa farms and farmers can be an engine for stability, economic security and biodiversity protection, so I urge other companies in the supply chain to join this collaboration and support these efforts,” said Jean Paul Kibambe, Director of the Wildlife Conservation Society, DRC.

“We are delighted to see so many stakeholders engaged in protecting the forest and conserving biodiversity while supporting farmers with best practices in cocoa production in order to improve household incomes while fostering sustainable development,” noted USAID DRC Mission Director Paul Sabatine.

The partnership looks to create a model that focuses cocoa production in certain areas, while avoiding deforestation in other spaces that are extremely valuable for conservation. It would offer a new model to protect forests while supporting local livelihoods in areas before they face widespread deforestation.

The Congo Basin Institute is a research and practice institute dedicated to developing and testing science-based solutions to challenges of conservation, food security, climate change, and human health in the Congo Basin. It was co-founded by UCLA and the International Institute of Tropical Agriculture (IITA). Based in Los Angeles, California, UCLA is a public research university with a mission of creation, dissemination, preservation and application of knowledge for the betterment of our global society. In 2021, it was named the No. 1 ranked public university by U.S. News and World Report for the fifth consecutive year and enrolls a diverse student body of over 40,000.

The International Institute of Tropical Agriculture (IITA) is an award-winning, research-for-development (R4D) organization, providing solutions to hunger, poverty, and the degradation of natural resources in Africa. It is part of CGIAR, a global research partnership for a food-secure future. Since 1967, IITA has worked with international and national partners to improve livelihoods, enhance food and nutrition security, increase employment, and preserve natural resource integrity. Our R4D programs focus on biotechnology and genetic improvement, natural resource management, plant production and health management, and social science and agribusiness.

Rikolto builds bridges between smallholder farmers’ organizations, companies, authorities and other actors across rural and urban areas to guarantee a sustainable income for farmers and nutritious, affordable food for everyone. Rikolto has worked on agricultural value chains in Eastern DRC for over 30 years.

Wildlife Conservation Society (WCS) is a U.S. NGO established in 1895 that saves wildlife and wild places worldwide through science, conservation action, education, and inspiring people to value nature. With more than a century of experience, WCS has been established in the DRC since 1985, and has amassed the biological knowledge, cultural understanding, and well-established partnerships to ensure that vibrant, wild places and wildlife thrive alongside local communities.