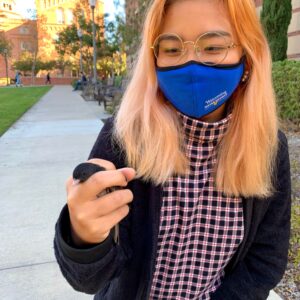 Bio: Carolyn Xue is a master’s student in Evolutionary Medicine program in the Yeh Lab at UCLA’s Department of Ecology and Evolutionary Biology. She received her B.S. in neuroscience from Johns Hopkins University, where she worked for a veterinary pathologist and was inspired to learn more about fields that investigate both animal and human health. She later received a Fulbright fellowship to research the spread of the zoonotic disease cryptosporidiosis from forest buffalo in Rwanda’s Volcanoes National Park. She hopes to promote ideas on One Health, work in preserving biodiversity, and grow her interests in art and science.