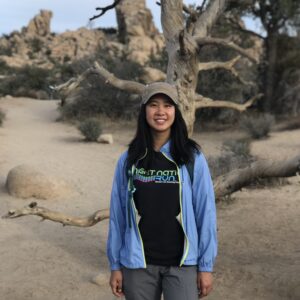 Bio: Stella Yuan is a first year PhD student at UCLA, co-advised by Dr. Robert Wayne and Dr. Kirk Lohmueller. She is broadly interested in the evolution of small or declining populations and hopes to use genomic and epigenomic tools to further conservation efforts. She previously conducted population ecology and population genetics research on the Humboldt’s flying squirrel as a master’s student at Humboldt State University and as an undergraduate at UCSD. She also worked as a wildlife intern at Point Reyes National Seashore with the National Park Service, monitoring the tule elk, spotted owl, and western snowy plover populations.

Project Summary: Endangered species are typically small, highly inbred populations that suffer from low genetic diversity, which is correlated with a heightened risk of extinction and a reduction in long-term viability. However, some species can persist even with low genetic diversity, like the island fox which has survived for over 9,000 years in small populations. This study aims to explore the role of epigenetics in mitigating the consequences of low genetic diversity in island foxes. The resulting data will provide conservation managers with more information to better maintain small populations as epigenetic variation may also be important to population survival and stability.