Riley Griesenbeck was only six at the time, but he still remembers the 2002 NBA playoffs.

His hometown team, the Sacramento Kings, had the best record in the league, but were up against Kobe Bryant, Shaquille O’Neal and the defending champion Los Angeles Lakers.

Watching with his grandfather, Riley was captivated. He acted out jump shots and slam dunks on the living room floor. But the Kings lost in heartbreaking fashion — overtime of game seven.

“It crushed me,” Riley said. “Being a Kings fan has taught me resilience, undying hope.”

He brought that hope with him to UCLA, where he’s one of 80 graduating in 2019 with degrees in environmental science — the largest class yet for the Institute of the Environment and Sustainability.

It’s a field that comes with more than its fair share of tough news, from melting ice caps to the extinction crisis.

But Riley sees good news, too, whether that’s volunteers cleaning up local wetlands or a major technological advance in clean energy. Focusing on the wins to stay positive, he reminds people that change often starts small.

“The first thing that needs to change is attitude,” he said. “If you believe you can’t make a difference you definitely won’t.”

Riley developed this philosophy during backpacking trips with his family.

“Those trips drew me to environmental science,” he said. “They made me appreciate the natural world. As I grew up and learned about all the terrible things people are doing to nature, it made me want to do something about it.”

In many ways, Riley fits the mold of a committed environmentalist. An avid hiker, he recycles everything he can and thrift shops for clothing — with reusable bags, of course.

In other ways, he resembles your typical college student. He is learning to surf. He struggled with chemistry and calculus at first. He enjoys the Vietnamese soup pho so much that he got a tattoo of it on his arm. He balances his personal budget with a desire to buy local, organic food, and was reluctant to stop eating meat, but cut it from his diet for environment reasons — and convinced his roommates to do the same.

Having a foot in both worlds comes in handy as an environmental advocate. Riley prioritizes personal conservation, but doesn’t judge others or expect everyone to conserve the same way. After all, people have different traditions, economic constraints and priorities.

He also understands large-scale solutions are needed to deal with global problems like climate change.

“Individual changes aren’t going to solve it all,” Riley said. “But I think it is easy to push off the individual stuff and say top-level things are the only ones that are going to make a difference.” 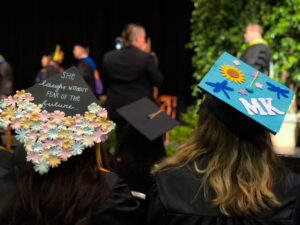 Riley accomplished a lot at UCLA. He conducted research for the National Science Foundation on backyard biodiversity, worked for the National Parks Service to improve trails and facilities, and spent time in the mountains competing on the university ski team. He studied abroad in Australia and did a yearlong senior practicum on reducing wildfire risk in the wake of the Woolsey Fire in Malibu.

At the commencement ceremony, keynote speaker Michael Martinez, executive director of L.A. Compost told students, “Go through your journey, appreciate decomposition and brokenness, understand your own renewal and transformation, and spread your magic far and wide.”

As he looks forward to life post-graduation, Riley sees lots of possibilities. “There are so many things you can do with an environmental science degree it becomes a little overwhelming.”

But first he’s looking forward to a bit of travel, possibly Vietnam or Nicaragua. But wherever the path leads, Riley will bring his optimistic philosophy with him. 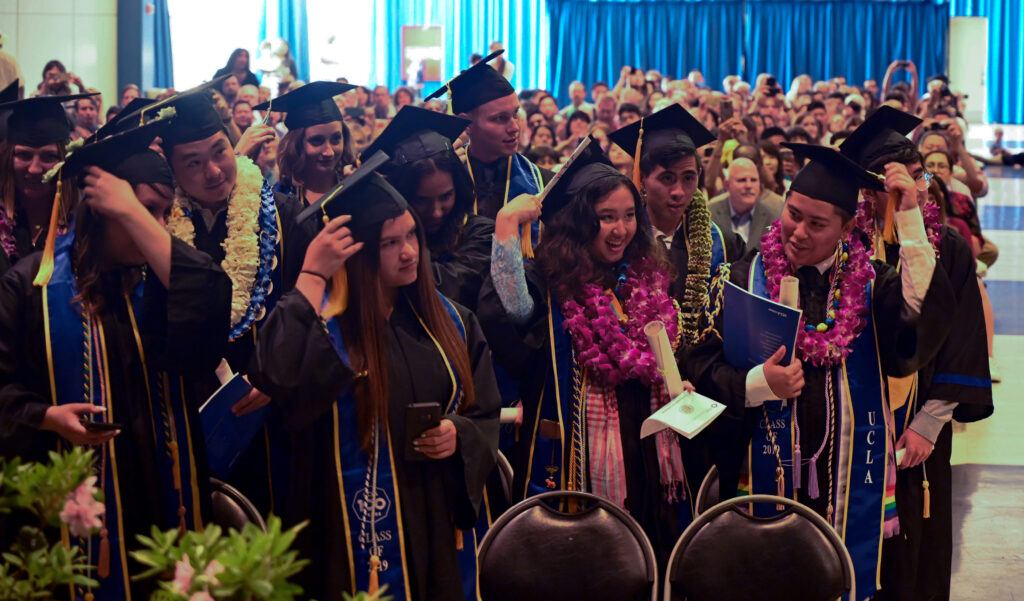