The rainforests of the Congo Basin are being lost at an accelerating rate, causing habitat degradation, biodiversity loss, and ecosystem service declines. Sustaining these forests depends on the presence and movement of animals responsible for dispersing seeds of trees. Yet, we have a poor understanding of how vegetation structure and function influences the movements of seed dispersing animals. We are investigating how forest structure, functional diversity, and phenology influence the movements of seed-dispersing animal species, and hence rainforest health and recovery from anthropogenic disturbance. By leveraging International Space Station (ISS) sensors focused on vegetation 3D structure (GEDI) and canopy function (DESIS; ECOSTRESS) in combination with conventional medium-resolution optical satellite data (Landsat, Sentinel), and other high-resolution data, we will integrate forest and habitat characteristics with animal movements in space and time to understand the dynamics that maintain rainforest resilience.

1. How do movements of key seed-dispersing animals (birds, bats, primates, and antelopes) vary with 3D forest structure at local and landscape scales?

2. How are habitat selection and movements of different seed-dispersers influenced by variation in vegetation functional diversity and phenology?

3. How does forest fragmentation and other anthropogenic disturbances influence animal movements and patterns of seed-dispersal?

We selected diverse seed-dispersing vertebrates that may occur across landscapes to address our hypotheses associated with movements and habitat structure. Species include: 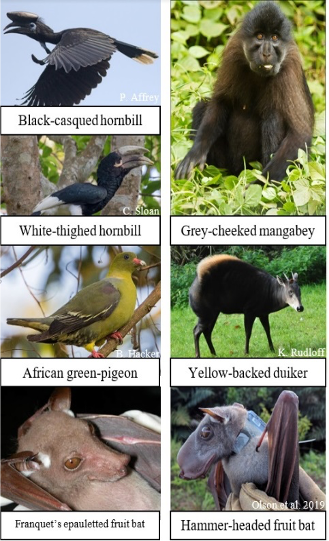 Fruit pigeons: The African green-pigeon (Treron calvus) inhabits both mature and degraded forests of Central Africa and appears to prefer tall trees (Pereira Chaves 2018). Green-pigeons disperse many species of tree (Beaune et al 2013). However, there is very limited information on their movements.

Antelopes (duiker): Yellow-backed duiker (Cephalophus silvicultor) is the largest duiker of the western Congo Basin (Feer 1995). It is known as one of the most important seed dispersing antelopes in Congo because they disperse both small and large seeds over long distances (Gautier-Hion et al 1985, Feer 1995). Large seeds consumed by duikers can be passed through the gut or regurgitated at their ‘bedding-down’ sites, a process known as spit-dispersal. Home ranges are between 4-200 hectares (Feer 1995), but little or no information is available on their movements.

Monkeys: Grey-cheeked mangabeys (Lophocebus albigena) forage on fruits in the mid- and lower-canopy and on the ground (Clark et al 2001). As arboreal primates that leap and dart through canopy foliage, they likely prefer forests with high connectivity in these strata. They are important dispersers of Uapaca tree species (Poulsen et al 2001). While they may consume some leaves to supplement their diet during fruit-lean periods, mangabeys do not appear to shift their movements from mid- and lower-canopy foliage as they change their diet (Poulsen et al 2002).

Fruit bats: The hammer-headed fruit bat (Hypsignathus monstrosus) is the largest bat species in central Africa, with males reaching 300 g. While found in dense, undisturbed forest, this species also inhabits urban areas (Monadjem and Taylor 2010). They are a lekking species (Olson et al 2019). Franquet’s epauletted fruit bat (Epomops franqueti) occupy a wide variety of habitats from undisturbed to disturbed forests with males weighing 150g (Monadjem and Taylor 2010). While fruit bats are very important seed dispersers, they are also reservoirs of Ebola virus and were implicated in the 2008 outbreak in the Democratic Republic of the Congo (Leroy et al 2009). Studying the movement patterns of fruit bats is therefore important not only for understanding seed dispersal, but alsofor understanding and predicting zoonotic diseases.